The planning of the day began in discussion between Arvind and me. Arvind threatened to withdraw my PhD if I didn't agree to organize the day. More seriously, I was delighted to facilitate such an occasion. A committee was formed of the following folks.

Andy and Derek lived in Baker House when I was a floor tutor (graduate resident). Andy joined CSG (Arvind's group) as a UROP (undergraduate researcher) working with Richard Soley (I think). Andy and I graduated together in 1989, Andy with his BS, and I with my PhD. Andy continued in the group as a grad student, taking over my role as group event organizer. Andy put together the technical program, no small challenge. Derek also joined the group, but stayed longer than Andy. Derek raised money for the event from CSAIL, an anonymous donor, Intel, Nokia, and Sun.

Jan joined CSG and also stayed a while, and eventually he joined Sun Labs where we work on the same team. Jan assembled a tree of Arvind's students and their students. Larry is Arvind's colleague, and was quite helpful in relating to people and organizations at MIT. Larry also set up a plannning TWiki for the planning committee.

In reality, most of the work was done by Sally Lee, Arvind's most excellent assistant. She built the official web site, organized registration, managed logistics for everything, designed the graphic above, ordered mugs, arranged food, arranged a band, arranged video taping, and on and on and on ... .

I drove the overall organization, sent out communication, and planned the evening festivities.

About a month before the event, Victor had offered to help in whatever way he was able, so he attended a committee meeting. His advice was quite helpful overall, and he suggested the book of memories, an excellent addition.

As a team, we generally worked pretty well together, meeting once a week on the phone and exchanging email in between. I'm not sure we were ever all on the phone at the same time.

Andy Shaw constructed the technical program. We looked back, reflected on current times, and looked ahead. The official program page is here.

In my toast, I first referred to two people who would have liked to be present, and we'd have liked to have them present, but they have passed away. By mentioning their names and saying a bit about them, I included them by reference.

First was the man who introduced me to Arvind. In 1979, Dr. Harold Fleisher, an IBM Fellow, brought his group to MIT to attend the Summer Dataflow course taught by Jack and Arvind. (Ray Phoenix, a member of Dr. Fleisher's team, wrote a song about Dataflow: Dataflow Forever.) The next summer, they hired Arvind to come to Poughkeepsie to consult with the group. That was my first summer with the group as a Co-op student (6A). Arvind spoke λ-Calculus, and I could spell λ, so I was the logical intermediary between Arvind and the IBM team. Arvind and I eventually ended up working together redesigning the group's language IDL (Interactive Design Language), a language for specifying control logic that could generate PLA personalities. Arvind and I were charged with the design of a structured version of this hardware specification language for control hardware synthesis.

A second person we all miss and remember fondly is Bhaskar Guha-Roy. Bhaskar was a delightful team member that brought smiles to all our faces as he smiled along with us. Known by some as Bhaskar Bhaiya, we miss him dearly. Here is Greg Papadopoulos, Bhaskar, David Culler and me at Bhaskar and Marsala's wedding. 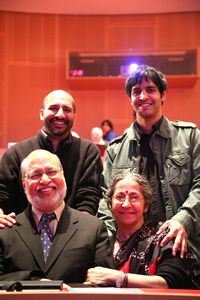 My toast continued by noticing the large family around Arvind, a group of many types of people.

One man brings us all together. Please join me in a toast to Arvind. Cheers!

Victor Zue, representing CSAIL, chaired a mock exam given to Avind by several of his students. Srini Devadas, representing EECS, also sat on the exam committee. Chuck Johnson, Arvind's Patron, had hoped to sit on the committee as well, but was unable to attend. Chuck was wondering if Arvind really deserved to be supported in the future. Okay, he wasn't really wondering, but all's fair in toasting and roasting.

Yonald Chery was a hard act to follow. Andy Shaw waxed philosophical on Arvind's naming strategy. Richard Soley and Alex Caro roasted Arvind to a crisp. I sang a song written for the event.

Arvind defended himself, and Gita said the following. 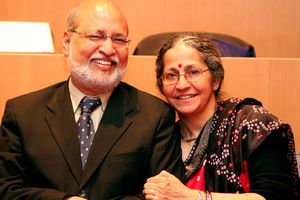 In Hindi there is a saying : "Do Haathon se taali bajti hai" which means, that it takes two hands to clap. I feel overwhelmed with the love and recognition given me for the family atmosphere that prevailed in Arvind's group. But it was a two way process... we got so much love, and Divakar and Prabhakar are who they are thanks to all the interaction and fun they experienced growing up among the talented students Arvind was lucky to have taught. They were held upside down, there was magic and balloon animals, and of course they had ready made big brothers (Bhaiya) and sisters (Didi). Hilary Cilnton wrote a book 'It takes a village to raise a family", but my sons grew up in one at MIT. Thank you for all the love and attention you have showered on our family.

There are some people I would like to recognise who are here to celebrate with Arvind: Prof Ramchandra Rao Dasari, Associate Director of the Laser Research Laboratory at MIT, and his lovely wife Suhasini. They have been the warmest of friends and advisors to our family. Prof Rao taught Freshman Physics to Arvind at IIT Kanpur in 1964! Currently Prof Rao is the director of the Physics Laser Lab and Suhasini works as an Administrator at the MIT Health Plan. Dr. Aroop Manglik, Arvind's uncle. He lives in Albuquerqe and when he heard that Arvind was turning 60, he said he was coming to celebrate! Natalie Tarbet, Arvind's secretary in the early years, and a dear friend to all of us. Natalie was a real mother figure to all the students, and was able to tick them off as well, something that I could not have done!

About 2 weeks before I was leaving for India on the 16th of April to take care of my mother, I wrote to Steve to ask if I could help in any way for the big event. He wrote'"Oh no, no, no. Don't worry if you cannot make it back in time. You only have one mother, but you could always get another husband!"